helo.my: With a multi-racial and multi-cultural society, Malaysians tend to speak more than a few languages and dialects.

They also speak some dialects such as Hokkien, Hakka, and Cantonese, and even Tamil!

A few days ago, a video clip of two Malaysian women talking in Tamil in a foreign country went viral on social media.

The video was uploaded by TikTok user @ainaafiqah72 who just wanted to share her experiences while on holiday in Turkey, and also in conjunction with Deepavali.

Accordingly, the video clip, which was taken in 2018, shows her mom, a Malay woman, talking to a Malaysian Chinese woman at a Turkish airport.

Much to everyone’s surprise, they both speak fluently in Tamil. 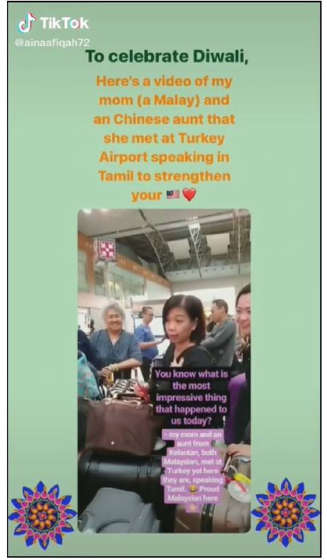 The Chinese woman in the video, Jolin Toh, said in an interview with TanTan News, that she was at an airport in Turkey with her family.

Toh and her family were waiting for a flight back to Malaysia when she happened to talk to the Malay woman known as Rosni Mohd Yusof.

Rosni, in a separate interview with Berita Harian, said she and her daughter was supposed to fly back to Malaysia but found that her passport was missing at the airport.

At that time, my daughter, who spoke Mandarin, met a group of women who were talking in Mandarin, so she went over to talk to them. During the chat, she knew that Chinese women from Kelantan could also speak Tamil, and we talked in Tamil.

Both Toh and Rosni recalled that people around them were surprised.

Indeed, for those who didn’t know better, they might have thought that Toh and Rosni are travel companions!

Both Ladies Learned To Speak Tamil At A Very Young Age

Toh said she grew up in a neighborhood with many Indian kids.

Her family was the only Chinese in the neighborhood in Kuala Ketil, Kedah. Her father’s colleagues were also mostly Indian.

She has an Indian name, Lakshmi, and so her kids and grandchildren.

Whenever she orders food or buys groceries in Tamil, many people will be surprised at how come her Tamil is so smooth.

In fact, her fluency in Tamil endears them to her.

Toh also cooks Indian food such as tosei and curry, which are her family’s favorites.

As for Rosni, who grew up in Sungai Siput, Perak, she also learned the language from her Indian friends.

She began to speak Tamil when she was only seven years old.

Although I can’t say it as good as before, I still can surprise people when talking to Indians in Tamil occasionally.

Rosni said she was not from a well-to-do family and could only study until year four.

However, she is very grateful because she has another advantage, which is the ability to speak in a third language.

She likes all languages from other races. When she hear other races talking to each other, she would be so happy and feel even more satisfied if she can understand and speak the same.

This is why, she sent her daughter Aina to a Chinese school to learn Mandarin, something her family couldn’t afford to do when she was a kid.

Bring Back The Racial Harmony Of Yesteryear

Netizens said the video clip made them appreciate the nation’s peace, harmony and unity. 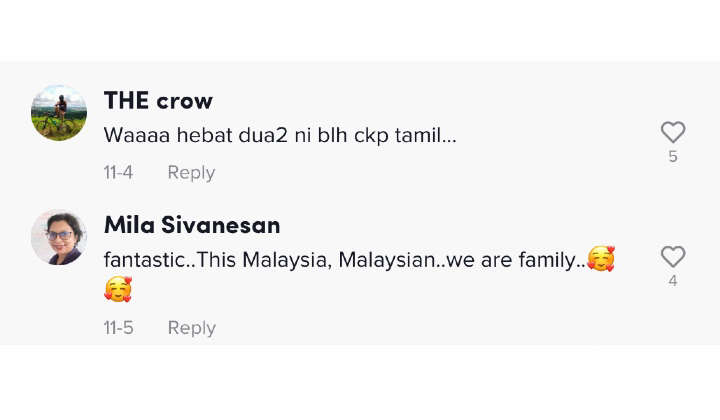 As a Malaysian, of course I am impressed with them and did not expect the video to gain high views and be contagious in a short period of time.

Her video, which had more than 883,000 views at the time of writing, is a timely reminder to all Malaysians that unity is a priceless gift.

A blessing that must be safeguarded and appreciated.

Despite the rising polarization over race, religion, and reform, it’s not impossible to bring back the muhibbah spirit of the 70s, 80s and 90s.

Muhibbah will flourish when people learn and respect each other’s culture.

Of course, there are many ways to about other cultures, but language learning really allows for a more immersive experience.